As we travel among the Thwaites menagerie of giant icebergs, it’s hard to believe that a thousand feet below the ship sits warm water. This ocean layer, moving slowly toward the base of the ice deep beneath the floating ice shelves has led to faster ice flow, thinning, and more frequent giant calving events at some of the Antarctic outlet glaciers. The water, called Circumpolar Deep Water (or CDW for short), is “relatively warm,” about 3°C (5°F) above seawater freezing temperatures, and it lies below about 250 m (~900 ft) depth in the oceans surrounding Antarctica. The water has a huge melting potential for the ice shelves and icebergs that it interacts with, including the Thwaites Glacier, our main target, but the question is how much of it actually reaches the ice.

You may have heard about the B-46 iceberg that broke off in October last year from Pine Island Glacier (adjacent to Thwaites), measuring about 40 km (25 miles) across, about four times the size of Manhattan. In the last two decades, there have been large calving events like this one in 2001, 2007, 2013, 2015, 2017, and now 2018. In most places, calving occurs regularly, with some ice breaking off and then ice behind it filling its place. The past few years of rapid calving at Pine Island has led to a retreat of Pine Island Glacier. Thwaites Glacier has also seen an increase in calving and break-up of ice at its “grounding line,” the region where the flowing ice begins to float on seawater. That line has moved steadily landward for both these massive glaciers, and for the entire coastline of Pine Island Bay.

The TARSAN research team on this cruise is primarily focused on understanding this layer of warm water, how much heat it carries to the big glaciers, and how it ultimately impacts the ice. By February 8, two days after we saw the first iceberg, we had just begun the work planned to study the water column and, especially, the Circumpolar Deep Water there. We had conducted two CTD casts, one in the deep Southern Ocean and one here on the continental shelf. CTD stands for conductivity (used to calculate salinity), temperature, and depth. The CTD instrument is a giant cylinder of silver metal bars with a ring of long gray bottles for water sampling. A cluster of instruments sits at the base of the cylinder. It’s the oceanographer’s bread-and-butter for studying water masses throughout the world. Dropping the CTD down to the ocean floor gave us a detailed picture of the cool, slightly fresher water near the surface and the warm, salty water sitting below it for that specific time and location. 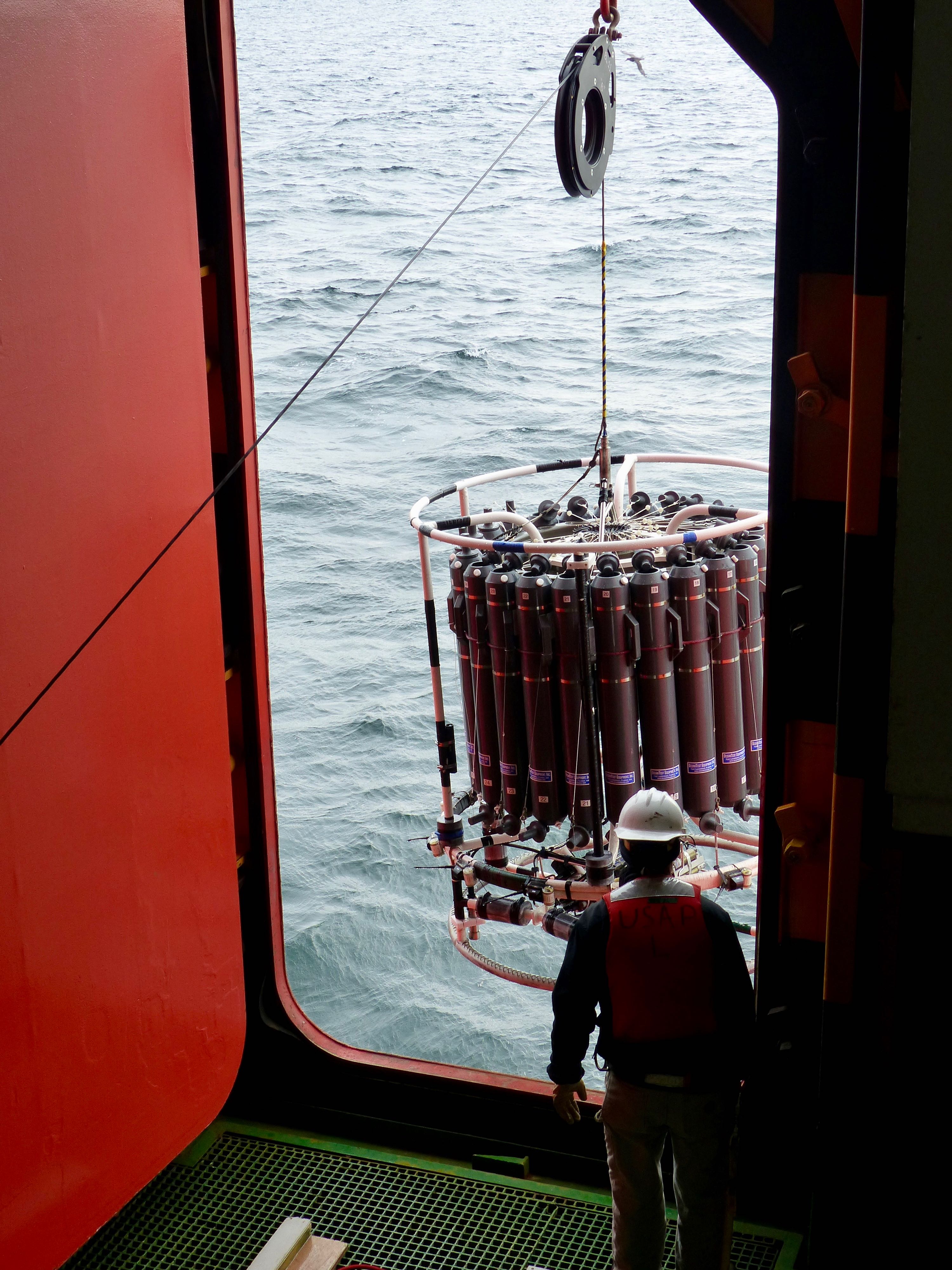 Jack Greenberg brings the CTD safely into the belly of the ship after a successful cast. Photo credit: Tasha Snow

To learn more about how the water varies across time and space, we have also deployed more high-tech instruments: an ocean glider and the HUGIN Autonomous Underwater Vehicle (AUV). The ocean glider is a small yellow torpedo-shaped instrument that glides up and down in a see-saw pattern through the ocean, measuring temperature and salinity as it travels. The motion comes from changing the buoyancy of the glider – heavier, and it tries to descend, but its wings and rudder move it in a programmed direction. When it pumps air into its chamber to become lighter, it moves upward, and again is steered by the wings. Commands for where to go are programmed into it before release or via satellite communication directly from the University of East Anglia while deployed. We have also deployed the University of Gothenburg’s HUGIN, mentioned in a previous blog post, to capture temperature, salinity, and velocity of the water – among other things – along a predetermined circuitous path. During a 13-hour voyage in the northeastern part of the Amundsen Sea, the HUGIN travelled a path at a constant 90 m (300 ft) above the bottom of the ocean, taking it from 300 m to more than 800 m deep (1050-2800 ft, or the height of several skyscrapers) and allowing it to move between CDW and surface water. While the HUGIN doesn’t always capture a picture of the entire water column in one location, it excels at building a detailed map over a wide area and it is the only instrument of the three directly measuring water velocities. Together, the glider and AUV helped build a map across 30 km2 of the eastern Amundsen Sea. 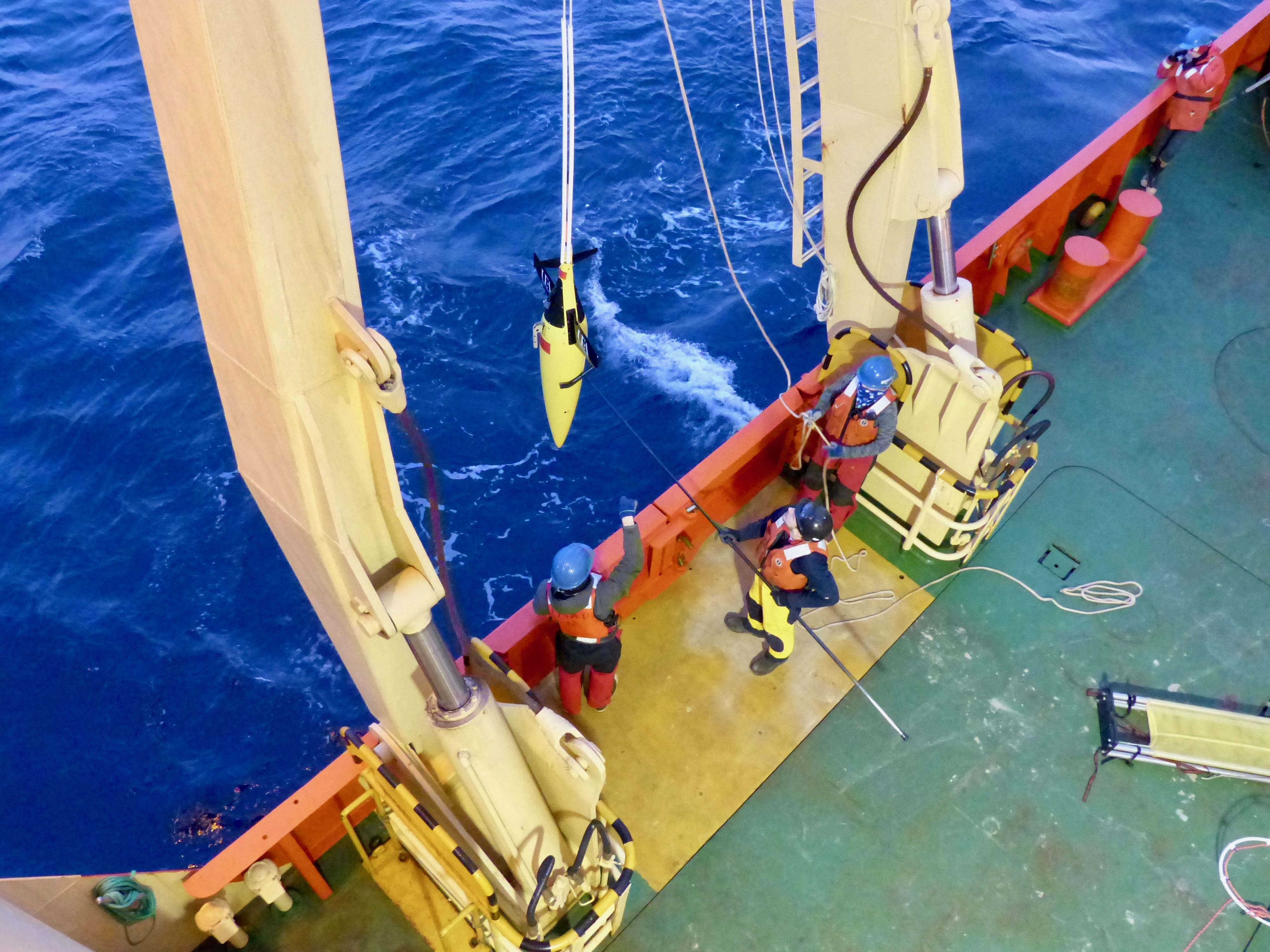 TARSAN scientist, Bastien Queste from the University of East Anglia (middle), deploys the ocean glider over the side of the Palmer with help from Carmen Greto (left) and Jennie Mowatt (right). The glider conducted measurements for 3 days as planned.

While these instruments have different strengths, when used together, they complement each other well to fill in gaps. The instruments have only just begun gathering the large amount of data we need to get a complete picture of how much and how warm the Circumpolar Deep Water is in the Amundsen Sea, and how it is moving. All of them, though, clearly show the deep CDW water mass, like a neon sign, in the temperature readings. The scientists are buzzing with excitement about filling in this huge piece of the glacier puzzle of what has and will continue to impact the spectacular ice around us. TARSAN certainly has their work cut out for them. 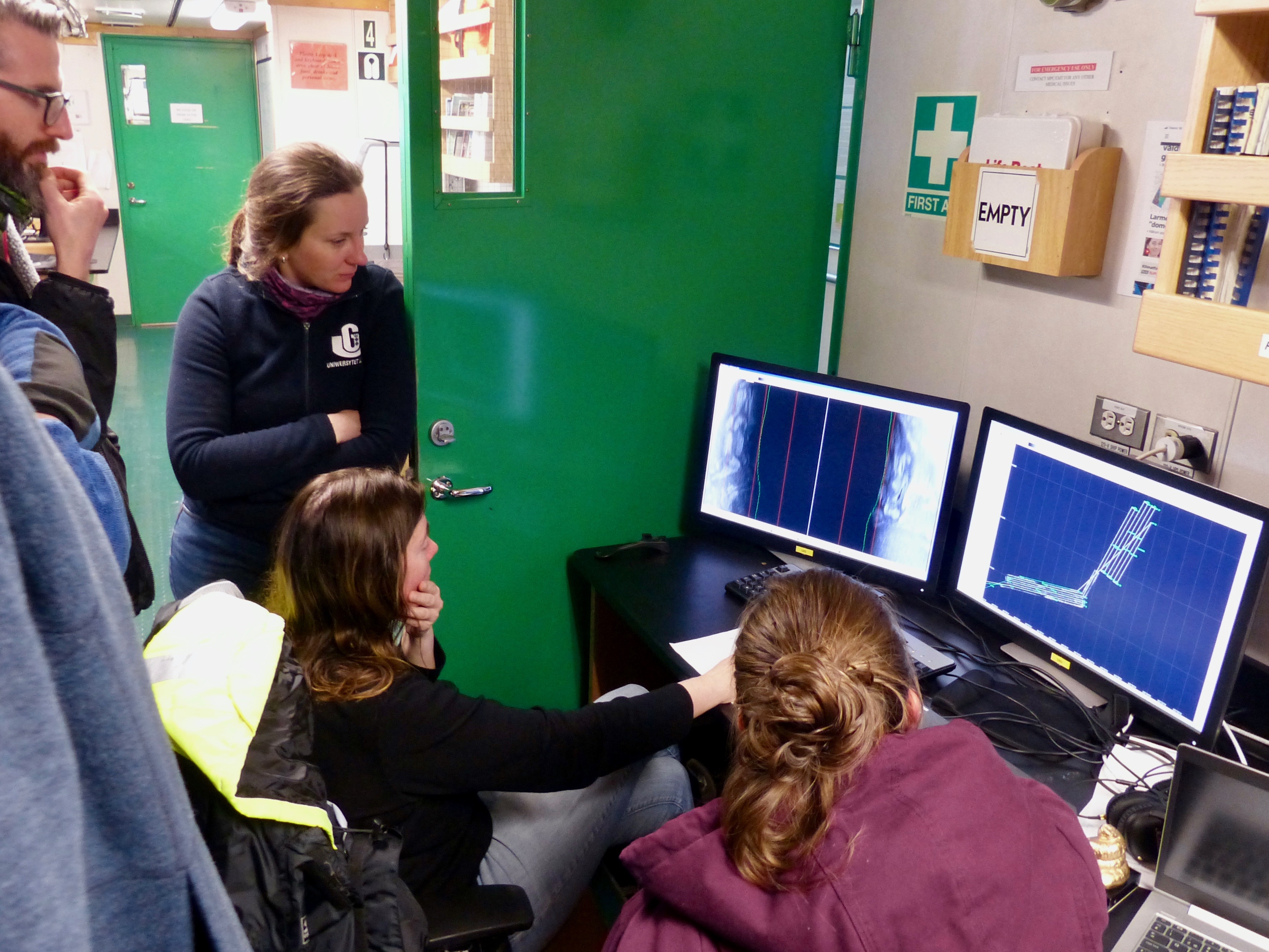