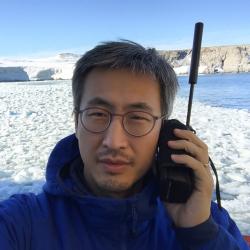 Won Sang Lee is a principal research scientist at the Korea Polar Research Institute. His research interests include cryoseismology; hydroacoustics; ice sheet modeling; and other related subjects to the cryosphere.

Lee is a lead principal investigator on the South Korea-led LIONESS-TG project. He has been a chief scientist/science lead/co-investigator on Antarctic field programs since 2006. He and his research group will sail down to Antarctica to establish a multidisciplinary observation network (land/ice/ocean) to investigate subglacial hydrology, ocean heat delivery/geothermal heat flux, ice mass balance, and postglacial rebound in the Thwaites Glacier region, which would help to reduce the uncertainty in the projection of future sea level rise.