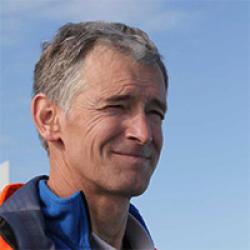 Keith Nicholls is a research scientist at the British Antarctic Survey. He specializes in polar physical oceanography, and has focused his research especially on the Weddell, Bellingshausen, and Amundsen Seas. He has also has contributed to the development of the ApRES (Autonomous phase-sensitive Radio Echo Sounder) instrument.

As a lead Principal Investigator on the MELT project, Nicholls and his team will use a variety of techniques to monitor the ice above and below the grounding line, which is the point where a glacier floats on the ocean, on the Thwaites Glacier.