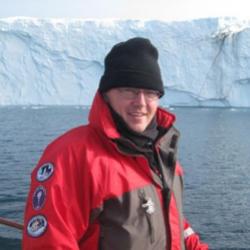 David Holland is a professor of mathematics and atmosphere/ocean science at the Courant Institute of Mathematical Sciences at New York University, director of the Environmental Fluid Dynamics Laboratory (EFDL) in New York City, and director of the Center for Sea Level Change at New York University Abu Dhabi. He studies phenomena relating to the Polar Regions and their impacts on global climate. Holland's current research focuses on the computer modeling of the interaction of the Earth's ice sheets with ocean waters, and the acquisition and implementation of observational data for model improvements.

Holland is a lead Principal Investigator on the MELT project. He and his team will measure the melting at the glacier's ice-ocean interface, to understand the processes involved and its potential for triggering increased sea-level rise.