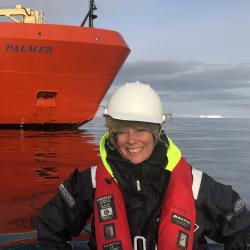 Anna Wåhlin (ORCID: https://orcid.org/0000-0003-1799-6476) is a Professor of Physical Oceanography at the Department of Marine Sciences, University of Gothenburg. Her research focus is in the field of Polar Oceanography, mostly in the Southern Ocean. Specifically, her research investigates several aspects of dynamics of polar seas, including physical oceanography, ocean circulation, topographic effects, ice shelf melt processes and air-sea-ice interaction. When Wåhlin was appointed professor in 2015, she became Sweden’s first female full Professor of Oceanography. She is project leader for Sweden’s national AUV infrastructure funded by the Knut and Alice Wallenberg Foundation. Between 2015 and 2017, Wåhlin was co-chair of the joint Scientific Committee on Antarctic Research (SCAR) and SCOR initiative Southern Ocean Observing System (SOOS). She is an Associate Editor of the journal Advances in Polar Science and member of the IOW scientific advisory board (2016-2019). Her awards include being a Fulbright Scholar (2007-2008), receiving a Crafoord Research Stipend from the Swedish Royal Academy of Science (2010), being a SCAR visiting professor (2013) and receiving the Albert Wallin science prize from the Royal Society of Arts and Sciences (KKVS) in Gothenburg 2018.