A joint UK-US research programme launched today (Monday 30 April) is one of the most detailed and extensive examinations of a massive Antarctic glacier ever undertaken.

The collapse of the Thwaites Glacier in West Antarctica could significantly affect global sea levels. It already drains an area roughly the size of Britain or the US state of Florida, accounting for around four per cent of global sea-level rise —an amount that has doubled since the mid-1990s. 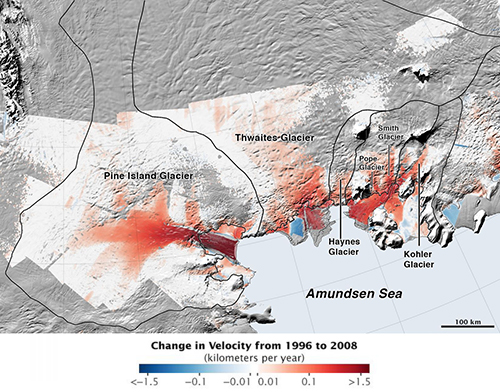 These fast-moving glaciers are considered the “weak underbelly” of the West Antarctic Ice Sheet (WAIS). Satellite observations show calculated changes in ice flow between 1996 and 2008. Red is accelerating; blue is slowing. The black lines indicate the boundaries of the drainage basin—not how Thwaites expands broadly toward the top of the image, covering much of the central West Antarctic Ice Sheet (WAIS). Changes in flow speed already extend far inland. Thwaites Glacier, in particular, could pave the path for a large retreat of the WAIS. Credit: NASA, NSIDC.

As part of a new £20 million (approx. $25 million) research collaboration, the UK Natural Environment Research Council and the US National Science Foundation will deploy scientists to gather the data needed to understand whether the glacier’s collapse could begin in the next few decades or centuries.

NERC and NSF have jointly funded eight large-scale projects that will bring together leading polar scientists in one of the most inhospitable regions of the planet.  The programme, called the International Thwaites Glacier Collaboration (ITGC), is the largest joint project undertaken by the two nations in Antarctica for more than 70 years - since the conclusion of a mapping project on the Antarctic Peninsula in the late 1940s.

Today’s collaboration involves around 100 scientists from world-leading research institutes in both countries alongside researchers from South Korea, Germany, Sweden, New Zealand and Finland, who will contribute to the various projects. These projects aim to deliver answers to some of the big questions for scientists trying to predict global sea-level rise.

Antarctica’s glaciers contribute to sea-level rise when more ice is lost to the ocean than is replaced by snow. To fully understand the causes of changes in ice flow requires research on the ice itself, the nearby ocean, and the Antarctic climate in the region.  The programme will deploy the most up-to-date instruments and techniques available, from drills that can make access holes 1,500 meters into the ice with jets of hot water to autonomous submarines like the Autosub Long Range affectionately known around the world as Boaty McBoatface.

In addition to the £20 million-worth ($25 million) of awards to the research teams, the logistics of mounting a scientific campaign in one of the most remote places in Antarctica could cost as much again in logistical support. The nearest permanently occupied research station to the Thwaites Glacier is more than 1600km away, so getting the scientists to where they need to be will take a massive joint effort from both nations.  While researchers on the ice will rely on aircraft support from UK and U.S. research stations, oceanographers and geophysicists will approach the glacier from the sea in UK and U.S. research icebreakers.

UK Science Minister, Sam Gyimah, said: “Rising sea levels are a globally important issue which cannot be tackled by one country alone. The Thwaites Glacier already contributes to rising sea levels and understanding its likely collapse in the coming century is vitally important.  Science, research and innovation is at the heart of our Industrial Strategy and this UK-U.S. research programme will be the biggest field campaign of its type ever mounted by these countries. I’m delighted that our world leading scientists will help leading this work.”

NERC's Chief Executive, Professor Duncan Wingham, said: “The fate of the Thwaites Glacier is one the big unknowns in Antarctic science. We currently do not know enough about the likelihood, timing and magnitude of the collapse of West Antarctic glaciers such as Thwaites for countries to be able to plan accordingly. NERC and NSF, working together, are uniquely placed to attempt to reduce the scientific uncertainty about these unknowns, providing answers to one of the most important questions facing us about global sea-level rise.”

Dr. William E. Easterling, assistant director for the National Science Foundation’s Geosciences Directorate, said: “Satellites show the Thwaites region is changing rapidly, but to answer the key questions of how much, and how quickly sea-level will change in the future requires scientists on the ground with sophisticated equipment collecting the data we need to measure rates of ice-volume, or ice-mass change. The challenges of conducting fieldwork of this scope and scale in such remote locations are enormous. The only practical way for nations to do this is to work collaboratively, each bringing their resources, both scientific and logistical, to enable complex and comprehensive field studies.“
Dr. Kelly K. Falkner, head of the NSF-managed U.S. Antarctic Program official, said: “The U.S. Antarctic Program has decades of experience in supporting large-scale international research initiatives--from building the world’s largest neutrino detector at the South Pole to supporting ice-core and sediment drilling projects that provided glimpses into the thawing and freezing of Antarctica over timescales of millions of years. I am fully confident that we will rise to the challenge of supporting these projects just as well.”

Lead scientific coordinator for the UK, Professor David Vaughan, Director of Science at British Antarctic Survey, said: “Whilst Antarctica seems far away, what is happening there is already affecting sea-levels around the world.  UK and US scientists have a track-record of working well together on the ice, and together we have a unique opportunity to change our understanding of Antarctica, and to make a difference by helping to provide the information we need to help protect coastal cities, ecosystems and vulnerable communities around the world.” 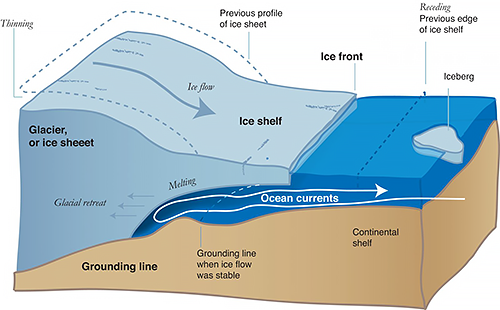 When the bedrock slopes inward toward the continent, warm, deep ocean water can flow downward under the ice shelf, chewing away at the grounding line. Melting can be as much as 20 to 50 meters of ice thickness each year. As the glacier’s base recedes, the brakes holding the continental ice ease up and the glaciers feeding the ice shelf accelerate, and thus further thin and recede the ice sheet. Credit: NSIDC, NASA.

Lead U.S. scientific coordinator, Dr. Ted Scambos, of the National Snow and Ice Data Center, said: “For more than a decade, satellites have identified this area as a region of massive ice loss and rapid change. But there are still many aspects of the ice and ocean that cannot be determined from space. We need to go there, with a robust scientific plan of activity, and learn more about how this area is changing in detail, so we can reduce the uncertainty of what might happen in the future.”

The science programme and logistics on the five-year programme begins in October 2018    and continues to 2021. The funding is for eight research projects and a co-ordination grant to maximise success.

The science activities and information gathered will be disseminated through several outreach and media-aimed efforts in the UK and US, and with websites and blogs. The data gathered by ITGC will be archived and freely shared at the end of the program to help future understanding of the area.

The Natural Environment Research Council (NERC) is the UK's main agency for funding and managing research, training and knowledge exchange in the environmental sciences. Our work covers the full range of atmospheric, Earth, biological, terrestrial and aquatic science, from the deep oceans to the upper atmosphere and from the poles to the equator. We coordinate some of the world's most exciting research projects, tackling major issues such as climate change, environmental influences on human health, the genetic make-up of life on Earth, and much more.  NERC is part of UK Research and Innovation, a non-departmental public body funded by a grant-in-aid from the UK government. Find out more at nerc.ukri.org.

The U.S. National Science Foundation (NSF) The U.S. Congress in 1950 established the Foundation "to promote the progress of science; to advance the national health, prosperity and welfare; to secure the national defense; and for other purposes." NSF is vital because its supports basic research to create knowledge that transforms the future. With an annual budget of $7.8 billion (fiscal year 2018), NSF funds discovery, learning, innovation and research infrastructure to boost U.S. leadership in all aspects of science, technology, engineering and mathematics (STEM) research and education. In contrast, other federal agencies support research focused on specific missions, such as health, energy or defense.

British Antarctic Survey (BAS), an institute of the Natural Environment Research Council (NERC), delivers and enables world-leading interdisciplinary research in the Polar Regions. Its skilled science and support staff based in Cambridge, Antarctica and the Arctic, work together to deliver research that uses the Polar Regions to advance our understanding of Earth as a sustainable planet. Through its extensive logistic capability and know how BAS facilitates access for the British and international science community to the UK polar research operation. Numerous national and international collaborations, combined with an excellent infrastructure help sustain a world leading position for the UK in Antarctic affairs. For more information visit www.bas.ac.uk @basnews.

The US National Snow and Ice Data Center (NSIDC) is a NASA-, NSF-, and NOAA-funded data and research centre focused on the cryosphere – the frozen regions of the Earth.  The centre manages remote sensing and field data of polar and mountain regions as the NASA Snow and Ice Distributed Active Archive Center (NSIDC DAAC), and supports a research team of 26 scientists active in all areas of polar and glacier research, including sea ice, glaciers, permafrost, and indigenous knowledge of polar-dwelling cultures. NSIDC is a valued part of the Cooperative Institute for Research in Environmental Sciences at the University of Colorado Boulder. Further information can be found at nsidc.org, or contact nsidc@nsidc.org.