Antarctic glacier may be more stable than initially feared

The world’s largest ice sheets may be in less danger of sudden collapse than previously predicted, according to new findings published this week in the journal Science.

A team of international researchers, led by University of Michigan, have simulated the demise of one of the world’s largest and most unstable glaciers – Thwaites Glaciers in West Antarctica. They modeled the collapse of various heights of ice cliffs—near-vertical formations that occur where glaciers and ice shelves meet the ocean. They found that instability doesn’t always lead to rapid disintegration.

Thwaites Glacier covers 192,000 square kilometers (74,000 square miles) – the size of the US state of Florida or Great Britain – and is particularly susceptible to climate and ocean changes. Over the past 30 years, the overall rate of ice loss from Thwaites and its neighbouring glaciers has increased more than 5-fold. Already, ice draining from Thwaites into the Amundsen Sea accounts for about four percent of global sea-level rise. A run-away collapse of the glacier could lead to a significant increase in sea levels of around 65 cm (25 inches) and scientists want to find out if or when this could happen.

The new findings add nuance to a 2016 theory called marine ice cliff instability, which suggested that if the height of an ice cliff reaches a certain threshold, it can suddenly disintegrate under its own weight in a chain reaction of ice fractures. Thwaites Glacier in Antarctica is moving closer to this threshold.

The researchers combined the variables of ice failure and ice flow for the first time, finding that stretching and thinning of ice, as well as buttressing from trapped chunks of ice, may moderate the effects of fracture-induced marine ice cliff instability.

“What we found is that over long timescales, ice behaves like a viscous fluid, sort of like a pancake spreading out in a frying pan. So the ice spreads out and thins faster than it can fail and this can stabilize collapse. But if the ice can’t thin fast enough, that’s when you have the possibility of rapid glacier collapse.”

The research team also found that icebergs that crack and fall away from the main glacier in a process known as “iceberg calving” may actually stave off, rather than contribute to, catastrophic collapse. If the ice chunks get grounded on outcroppings in the ocean floor, they can exert back pressure on the glacier to help stabilize it.

But Bassis notes that even if the glacier doesn’t catastrophically collapse, exposing a tall cliff could still trigger a retreat of a few kilometers per year, equal to the length of about 20 football fields and resulting in a large contribution to future sea-level rise.

While it's clear that Thwaites Glaciers and others are melting, the speed of their demise is of keen interest to coastal areas as they develop strategies to adapt and build resilience. But predicting the retreat of glaciers is a mind-bendingly complex business, as they’re affected by the interplay of myriad factors—the stress and strain of billions of tons of shifting ice, changing air and water temperatures and the effects of flowing liquid water on ice, to name just a few. As a result, the predictions for the collapse of the Thwaites Glacier range from a few decades to many centuries. The new study, Bassis says, is an important step toward producing accurate, actionable predictions.

“There’s no doubt that sea levels are rising, and that it’s going to continue in the coming decades. But I think this study offers hope that we’re not approaching a complete collapse— that there are measures that can mitigate and stabilize things. And we still have the opportunity to change things by making decisions about things like energy emissions—methane and CO2.”

Co-author Dr. Anna Crawford from University of St. Andrews says the study’s findings will also be useful for predicting the fate of other glaciers and ice formations in the Arctic and Antarctica. “These important insights will inform future research into the retreat of Thwaites Glacier and other large outlet glaciers of the West Antarctic Ice Sheet that are vulnerable to retreat via ice-cliff failure and marine ice-cliff instability,” she said. “They highlight the conditions that facilitate retreat, demonstrate the potential for terminus re-stabilization and show how sea ice can actually put the brakes on the collapse process.”

Bassis says the research team is already working to refine their models further by incorporating additional variables that affect glacial retreat, including how the shapes of individual glaciers affect their stability and the interaction between glacial ice and the liquid ocean around it. “The ocean is always there, sort of tickling the ice in a very complex way, and we’ve only known for a decade or two just how important it is,” he said. “But we’re beginning to understand that it’s driving a lot of the changes we’re seeing, and I think that’s going to be the next big frontier in our research.”

Transition to Marine Ice Cliff Instability Controlled by Ice Thickness Gradients and Velocity by J.N. Bassis, B. Berg, A.J. Crawford and D. Benn is published in the journal Science. This study is part of the International Thwaites Glacier Collaboration, one goal of which is to provide the critical observations of past and present Thwaites behavior to better test models and to predict with more certainty the future fate of the glacier.

The research was supported by the DOMINOS project, a component of the International Thwaites Glacier Collaboration, and by the National Science Foundation (grant number 1738896) and the Natural Environment Research Council (grant number NE/S006605/1).

Photograph of a small stable cliff in Greenland. The cliff is not very high and terminates on land and undergoes periodic slumps. Inset shows a simulation from our model showing slumps. Despite the slumps, the calved material has nowhere to go resulting in a stable calving front situation. Photo credit: Jeremy Bassis 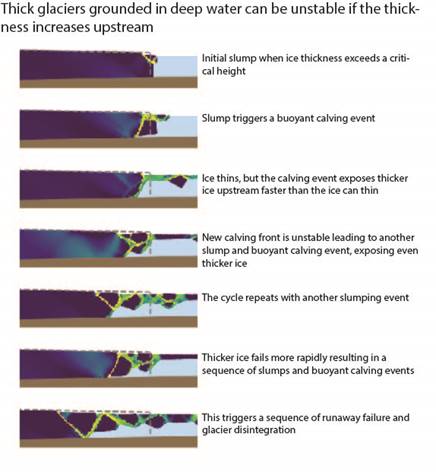 Sequence of model snapshots showing a thick cliff terminating in deep water. The ice thickness only increases slightly upstream from the calving cliff where thinning and advance of the ice balances the calving rate resulting in a stable or slowly advancing calving cliff. Credit: Jeremy J. Bassis 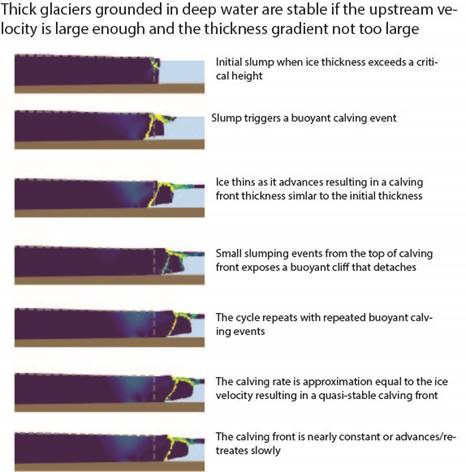