Beginning in late November of 2018, a huge effort started to place fuel and materiel at key locations in West Antarctica and on Thwaites Glacier, in preparation for the main ITGC field science effort set to begin less than a year from now. Exploratory field work and landings at the key research sites have established preliminary field camps and surveyed the ice there. Major equipment depots, and vast amounts of fuel for aircraft and vehicles are now in place for the coming multi-year program. 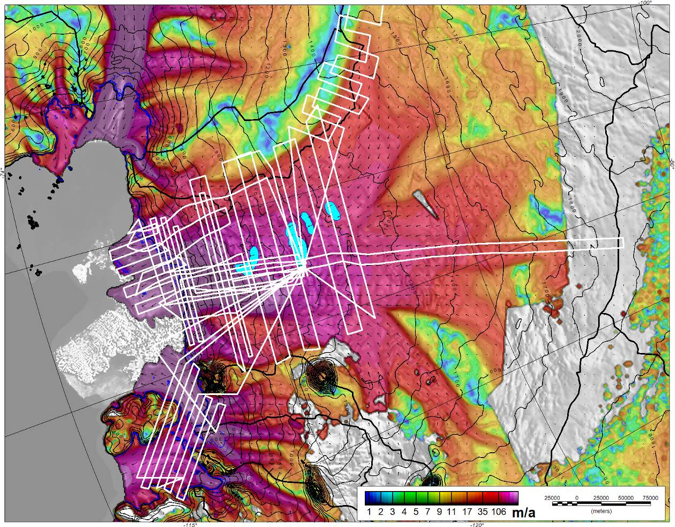 Map of BAS airborne geophysical survey area and planned flight lines in white. Colors indicate ice flow speed, showing the broad area of rapid flow and the many tributaries of Thwaites reaching into the interior of the West Antarctic Ice Sheet. Black contours show surface elevation. The sky-blue oval areas are lakes of water beneath the glacier.

The main National Science Foundation airlift group, the New York Air National Guard, have made 42 LC-130 Hercules flights to the WAIS Divide camp, each bringing about 17,500 pounds of gear, or offloading fuel for use by aircraft or vehicles in the project.

The NSF Antarctic science support traverse system, developed by Antarctic Support Contractors. has arrived at Byrd Surface Camp, depoting tons of supplies and fuel there, and continuing on to Lower Thwaites Glacier (LTG) camp to set up a skiway for routine aircraft landings this year and next. As part of this, they have brought fuel to support science mapping flights by the British Antarctic Survey (BAS) using their aerogeophysical instruments to survey in detail the snow, ice, and bedrock of the ITGC field project areas. BAS plans to fly over 9000 kilometers of air survey data over regions critical to the ITGC projects.

On the Peninsula side, BAS has been very active unloading two ice-capable cargo vessels, the Ernest Shackleton and the HMS Protector (picture) at the Stange Ice Shelf on the southwestern end of the Antarctic Peninsula. Combined, these two ships have offloaded additional aircraft fuel to support Twin Otter, RAF C-130, and Dash-7 aircraft landings at their SkyBlue blue ice runway and for several Thwaites ITGC sites. For snowmobiles, generators, and smaller tractors, an additional 80 drums of gasoline have been offloaded. For the people that will do the work — logistics and science, this year and next — 4800 day-rations of mostly canned and dehydrated field food have been offloaded for staging at LTG. Additionally, mobile living quarters on skis, and 4 lead tractors, are now set up to begin a trek across the ice sheet to the Eastern Shear Margin camp (ESM) and LTG, to bring fuel, food, and science gear to the region. 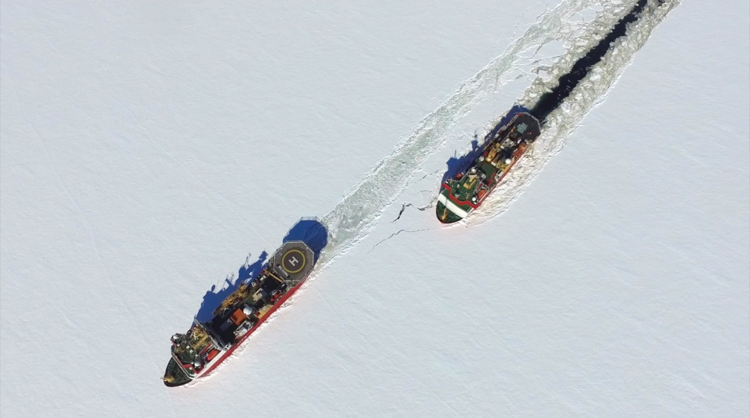 Two of the ITGC science projects, MELT and TIME, have established new landing sites at their planned areas of research for next year. A vanguard team for MELT, which will study the details of ocean flow and how warm ocean water melts and thins the ice at the grounding line, are conducting initial surveys of the Thwaites Glacier grounding line (where the glacier ice begins to go afloat as it reaches the sea). MELT Co-PIs Sridhar Anandakrishnan (also a Lead PI of GHOST) and Kiya Riverman are conducting the work, along with mountaineers Mike Roberts and Andy Bond. Landings by Twin Otter aircraft have now proven the feasibility of setting up camps at three sites on the Eastern Thwaites Ice Shelf, the site of most of the MELT teams work. The MELT team is using active seismic, with signals from explosives or hammer-strikes recorded by dozens of geophones placed in the snow.

The TIME group, with Marianne Karplus (see blog) and Galen Kaip are establishing sites for the camps near the eastern margin of Thwaites Glacier, where fast-flowing ice shears past near-stationary ice, and are now testing geophysical instruments near the WAIS Divide base. Understanding the physics of the shear margin and how it might move in the future is a critical piece of forecasting the future of Thwaites Glacier. The remainder of the 2018-2019 Antarctic fieldwork season will be all about hauling; hauling science gear, hauling fuel, and hauling living quarters for traverses next year. As of this writing, several massive depots of fuel and equipment surround the Thwaites Glacier study area, in motion via tractor traverse or planned to be moved as part of next season’s effort.