“We found a sea pig last night in one of the Megacore tubes,” Jennie Mowatt, a marine technician onboard, nonchalantly said as she passed around a video on her cell phone for all of the scientists in the meeting. With my late-night schedule, I had literally just thrown myself down from my top rack (bunk on the ship), gotten dressed and walked a couple rooms down to join our daily 0830 science planning meeting, eyes barely starting to open and adjust to the light. I had recently seen the hilarious YouTube video “True Facts about the Sea Pig” on the ship, so when Jennie casually made the comment, I immediately came out of my fogginess, excited. The 3 or 4 inch-long, piggish, many-legged cousin of the sea cucumber moving on the screen was gelatinous, tinted lightly pink, and transparent enough to see its organs. The sea pig had been in the core tube for about 24 hours when he had been discovered rooting around in the mud, or what geologists would refer to as bioturbating, which isn’t ideal for getting a good sediment core record. Our sea pig needed to come out.

The “Megacorer” that caught this fascinating creature was a 12-barrel coring contraption. A steel frame rings a square with four clear tubes on each side of the corer with a metallic web of complex trigger mechanisms at the top. On a perfect grab, it can capture 12 tubes of the interface between the ocean and sediment, with about 20 inches (50 cm) of it being sediment. Captured in 4-inch (10 cm) diameter transparent tubes, each core looked like a mud aquarium that might display worms, anemones, and other rare animals, like the sea pig. Linking back to my previous blog and the idea that one person’s noise is another’s signal, these creatures would have been interesting to study if we had a biologist onboard, but the sea pig wasn’t what we were there for. The THOR group was coring sediment for the story they could tell us about the history of Thwaites Glacier. 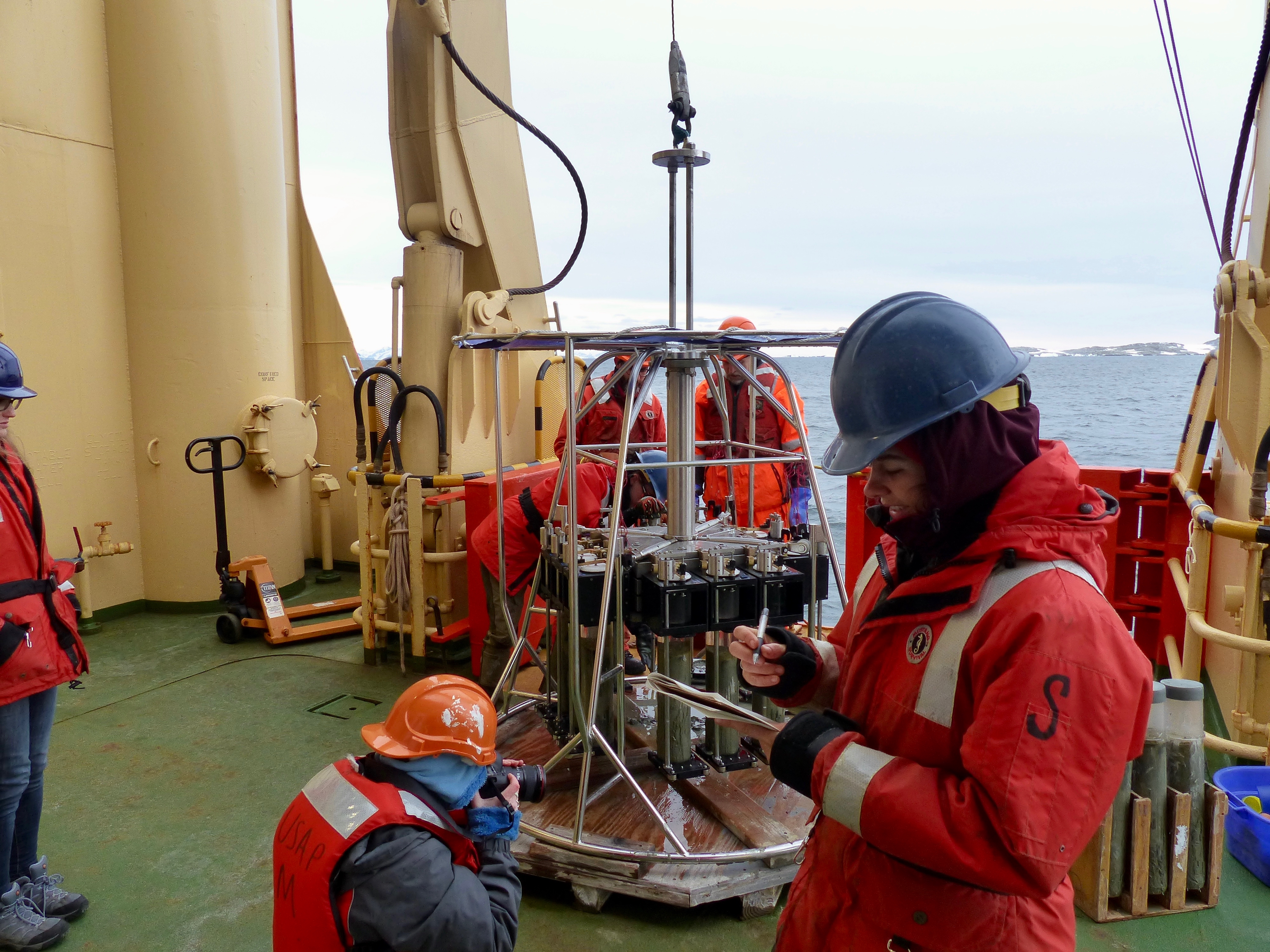 The Megacore has just been brought back from the seafloor with 11 successful sediment cores. They start the long processes of carefully pulling off the cores for the corer to take them inside the ship for sampling. Media members document the activities for their future media reports. From left to right: Carolyn Beeler, Linda Welzenbach, Becky Minzoni, Alistair Graham, Rob Larter, and Elizabeth Rush. (Photo credit: Tasha Snow)

Marine sediments are the history books for Earth’s past. Layers of different kinds of mud, rocks, and biological matter from the organisms that live in the water deposit on the sea floor and get buried over time. The sediments at the sea floor are very young and as you dig deeper become older and older. The kinds of sediments deposited change over time. If the glacier resided overhead during a period of time, there will be little to no sediments deposited and old pages of the history book will be scoured away and transported elsewhere by the ice. If the glacier retreated from the location, but still sat nearby spitting out rocks ground up beneath the glacier, there will be sands and rock fragments deposited in the layer. As the glacier retreats further away and the water above opens up and becomes productive, the layer will have more biological matter and finer muds and silts. A geologist can skillfully read a sediment core like a book to interpret past changes layer by layer. The layers get harder to interpret, though, if some have been removed or mixed together, like what occurs with bioturbation. Our sea pig was effectively taking the words out of the sediment history book, mixing them up, and putting them back in smeared together. To be fair to our gelatinous friend, bioturbation is a natural phenomenon that geologists expect to have to some extent in most regions. It inevitably is one component of the error taken into account in the analyses that eventually tell the story here.

The night THOR captured the sea pig, they had taken six sediment cores to try to capture a specific geological story: the recent history of Thwaites Glacier from at least the last century. They used three different kinds of coring devices to capture different parts of that story. The Megacorer that caught the sea pig excels at capturing a large quantity of the most recent sediments, so a lot of tests can be performed on them. To do this it is slowly lowered to the seafloor so as not to disturb the sediments below, and triggers when the wire holding the device loses tension. A piston drives down, pushing 12 tubes into surface sediments. If they drive in far enough, the bottoms of the core tubes close, trapping all of the sediment. THOR deployed the Kasten corer, another coring device, to go back further in time. It has a square barrel with giant weights sitting on top, which allows it to simply sink into the sediments using its own weight. As long as the weights needed are estimated well, the Kasten corer will capture the surface of the sediments down to 4.5 or 10.5 ft (1.5 or 3 m) depending on which length barrel THOR chooses. Lastly they used the jumbo gravity corer, which, as the name might suggest, carries the most punch out of all of the devices and has the capacity to drive in 20 ft (6 m). It carries more weight and is dropped rapidly into the sediments, driving in with gravity to capture as much sediment as possible. In doing so, it often blows out the soft sediments at the surface, but can get a record much longer, and thus older, than the other coring devices. 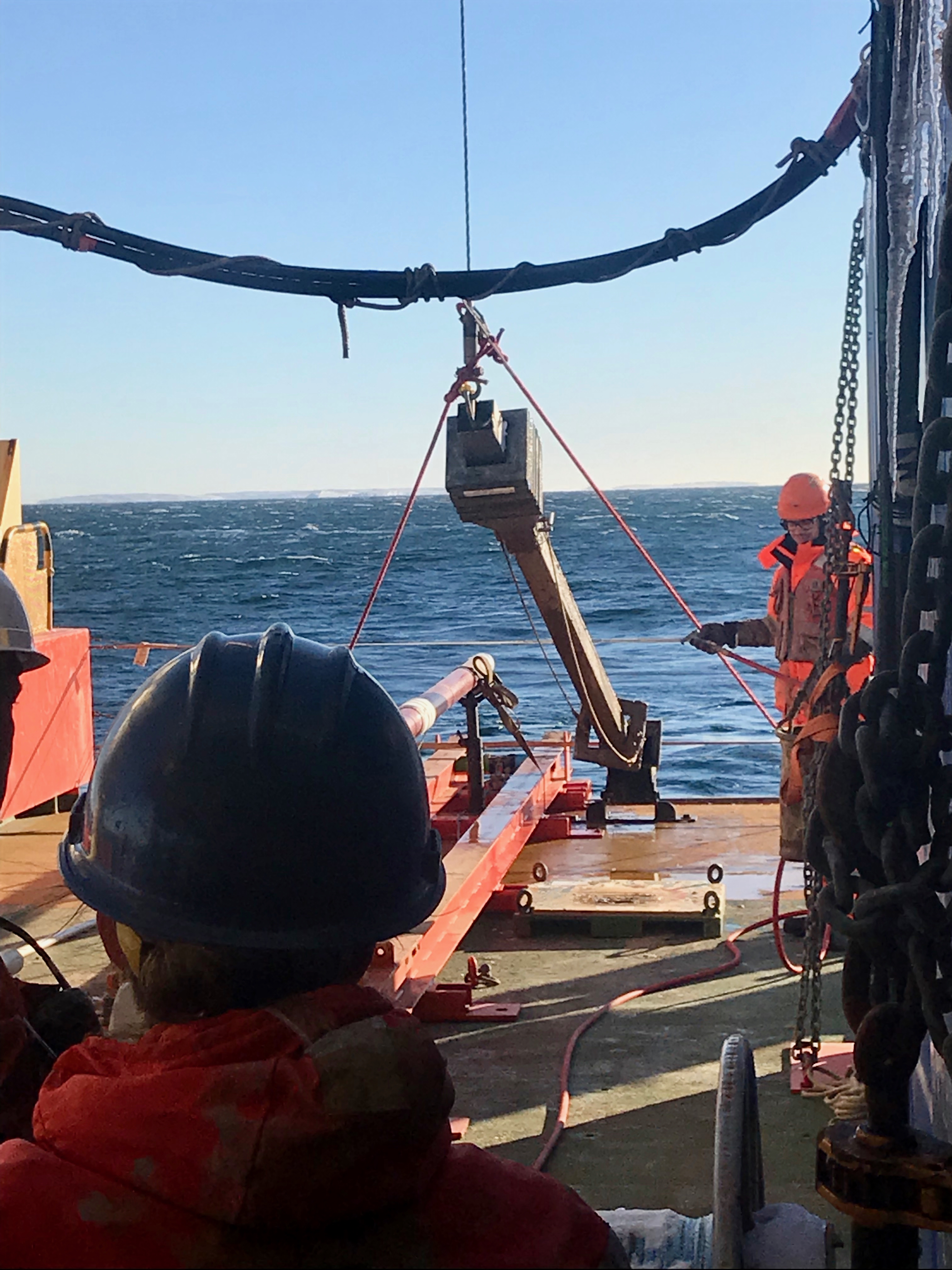 Peter Sheehan helps to secure and hose off the Kasten core just brought back up from the seafloor. Becky Minzoni waits excitedly for the core to be secured on the ship so that her team can open up the core to see if they successfully captured a sediment core. (Photo credit: Tasha Snow) 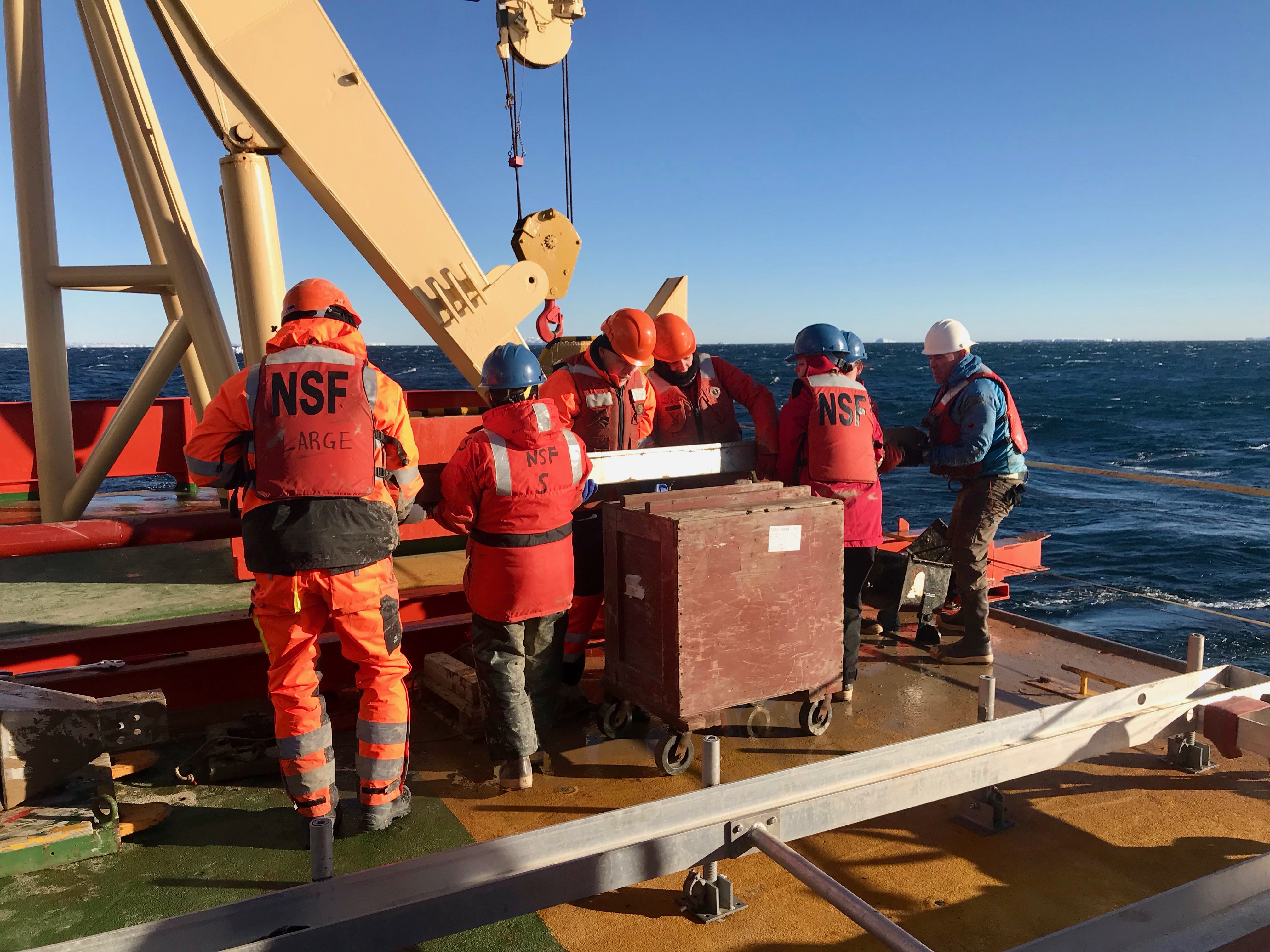 The THOR team lifts the Kasten core from the deck onto the trolley to bring it inside the ship where it will be completely opened and the sediments sampled. From left to right: James Kirkham, Victoria Fitzgerald, Rob Larter, Kelly Hogan, Rachel Clark, Becky Minzoni, and Jack Greenberg. (Photo credit: Tasha Snow)

To capture the full story of Thwaites’ recent past, the THOR team has taken cores at three locations, most shallow (1600 ft or 500 m) at the location nearest to the present ice front, and deepest (over 3200 ft or 1000 m) at the site furthest away. From the sediments, they can get an initial impression of the story of the cores they captured based on variations in the layers, which are apparent from color changes in the sediment from top to bottom, size of the grains in each layer, and the kinds of biological remains preserved or still alive, like our sea pig. To get a more accurate and detailed story, though, THOR took sediment samples from the entire length of the core for future analyses they will conduct at their home institutions or by other scientists in ITGC. Most important of these analyses will be the lead-210 dating from the uppermost sediments, and radiocarbon dating from the calcareous shells throughout the core that will give THOR an idea of the ages of the different events recorded in the core. Other chemical and biological analyses on the sediments can tell them, for example, when Circumpolar Deep Water may have been more or less present, how the temperature of the water there changed through time, and the glacial history at that site. All of the analyses will be performed over the next few years for each of the cores and will slowly bring together a detailed recent history for Thwaites Glacier. 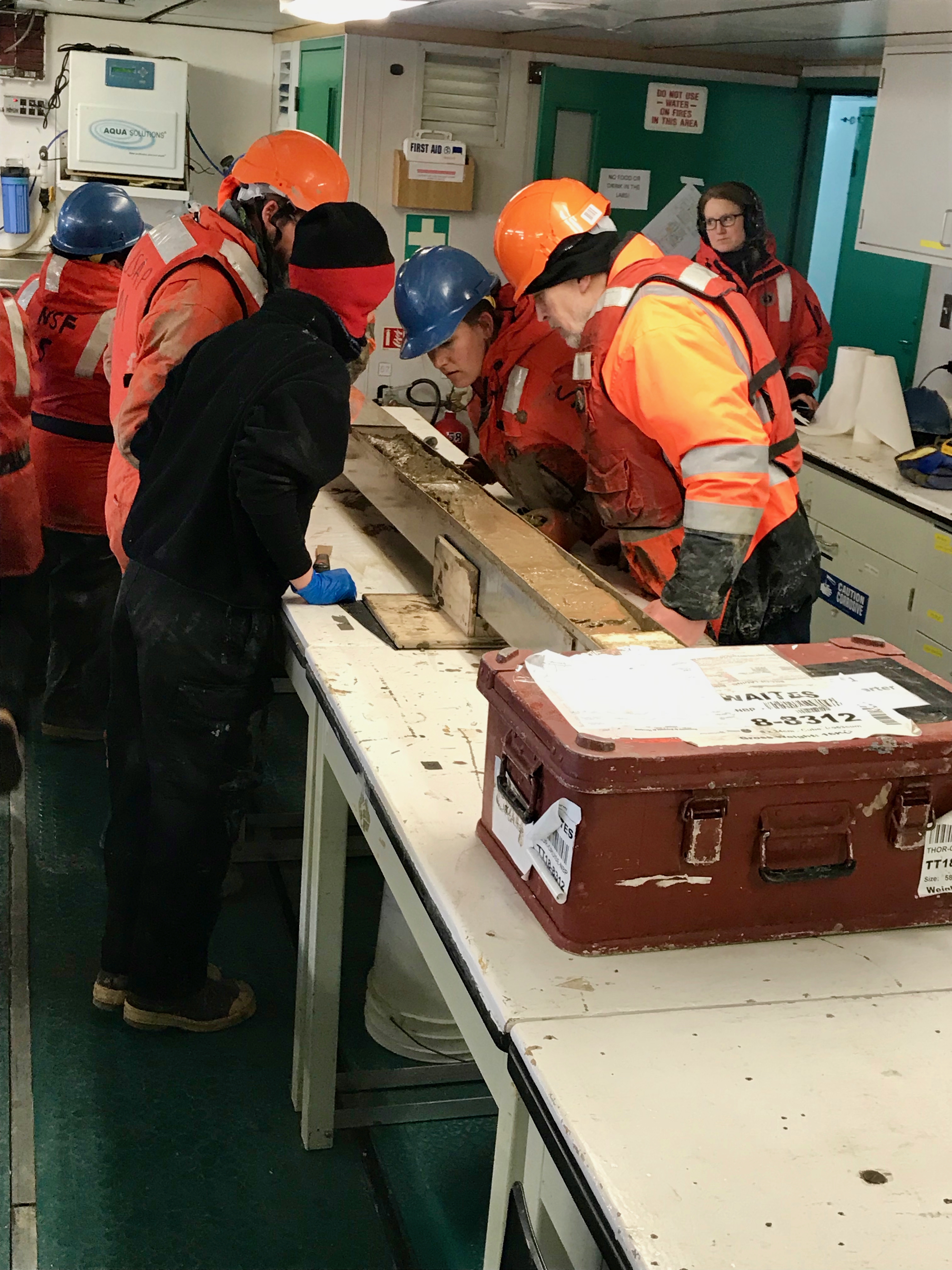 After taking the panels off the Kasten core, the THOR team takes their first look at the sediments to see what sort of story might be recorded in the different layers. (Photo credit: Tasha Snow)

Getting back to our alien-like abduction of the sea pig, he had a long 24 hours eating the organic matter in the sediments and rooting around in our core, essentially burning small pieces of the Thwaites history book we had captured. While he was able to be transplanted into a little container, he soon passed away. A lot of trauma probably comes from half-mile journey from the bottom of the ocean to our warmer ship. Mourning over his loss was short-lived, though, because two days later, we caught another sea pig in a Megacorer near Thwaites. With the thousands of kilometers we covered and the tiny fraction of that area that we sampled, what are the chances of that? After transplanting from its core, this sea pig put on an exciting bioluminescence display while it waited to be returned to its home. The second sea pig survived her journey to the ship and was successfully released back to the ocean. She hopefully made it back to her cozy sea floor to continue bioturbating the sediments with what has to be millions of her other sea pig friends. 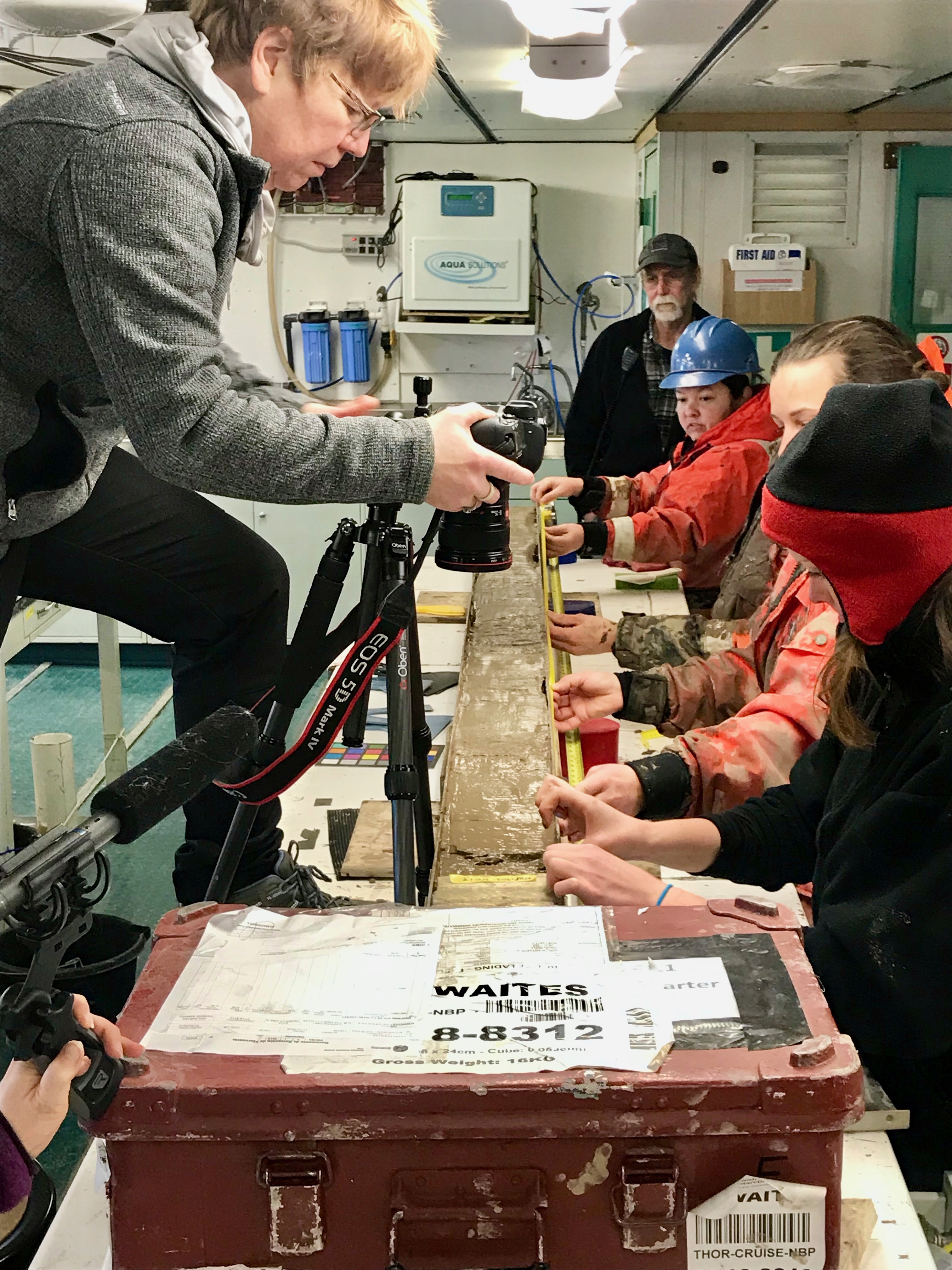 THOR team members together stick a measuring tape to the edge of the core in preparation to start sampling the sediments at specific depths in the core. They will take samples of sediment for age-dating, chemical, and biological measurements that will help them reconstruct the geological history at this site. Linda Welzenbach takes photos of the sediment core to document the changes in the layers that can be seen visually. (Photo credit: Tasha Snow)