While the seal team sat on one of the smaller Shaeffer Islands tagging their second and third seals (described in a previous blog post), GHC scientists, Scott Braddock and Meghan Spoth from the University of Maine, dug through ancient beaches for the Geological History Constraints (GHC) project of the International Thwaites Glacier Collaboration (ITGC). Scrambling off of the small boat onto the shore, I could see these relict beaches clearly along the gradual slope of the island. Lines of beach sediments stepped upward, looking to the eye like rounded and slightly lumpy terraces. They used to be the shoreline of this island, but now sit meters above the water line. 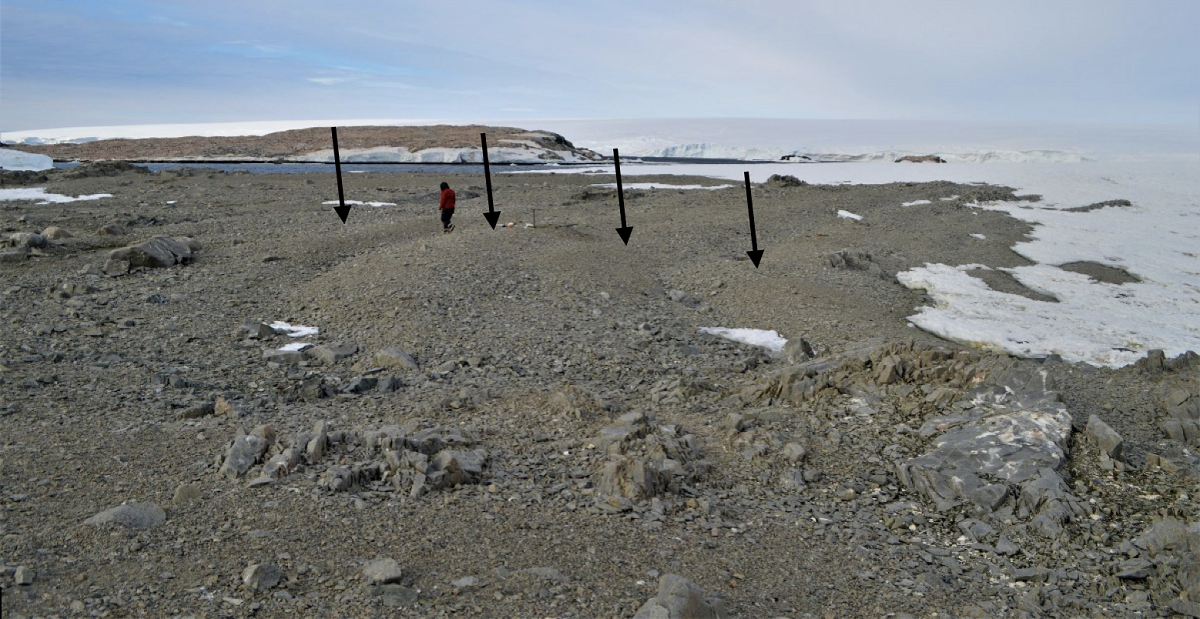 On one of the Edwards Islands, relict beaches (highlighted by black arrows) rise in lines along the slope of the island like lumpy terraces. Each beach was deposited when the island surface sat lower than today and the sea covered more of the island. Photo credit: Scott Braddock

With their ragtag team of scientists, Meghan and Scott searched for a very different kind of evidence of seals and penguins: seal and penguin bones, and preserved fur from seal molts deposited a few thousand years ago. Seals come to the islands to molt their fur. If the fur does not wash away, over time it can get trapped among the sediments on the beach, along with rocks, shells, and bones from animals that die on the shore. To meticulously sift through beach material, the team utilized a tool that you might expect at your dining room table more than at a dig site on a deserted island: the ever-dependable spoon. Along with rocks and shells, the preserved remnants of these charismatic animals can help us determine the size of the ice sheet, here, in the recent past. The connection isn’t immediately obvious, though. 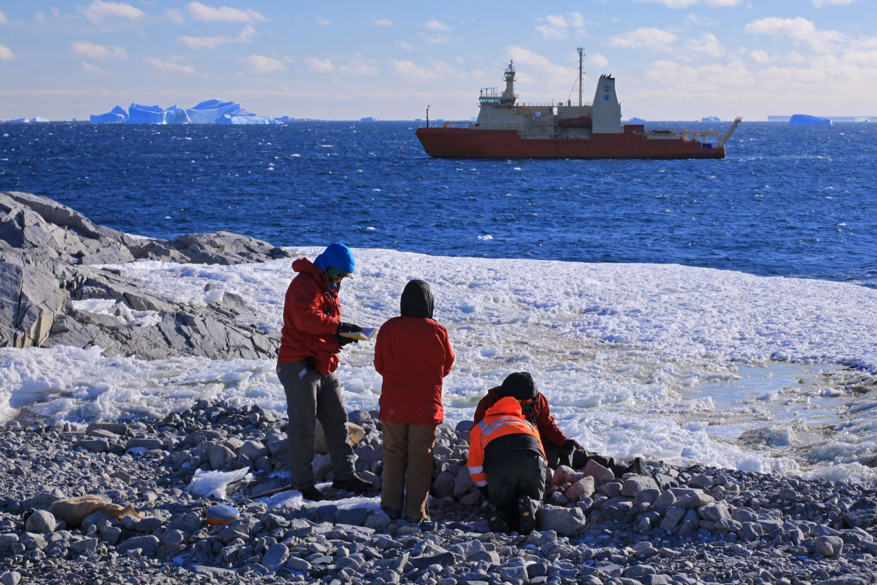 Ice sheet size and mass has an effect on the underlying surface of the earth. When an ice sheet grows, its tremendous weight causes the deep earth to move beneath it in predictable ways, called isostasy. Remembering back to middle school science class, the Earth beneath our feet includes the lithosphere (solid top layer that includes the crust and upper mantle), the asthenosphere (malleable part of the mantle), and the liquid and solid core. When a giant mass, like an ice sheet, sits on the surface of the Earth, it gradually pushes some of the softer, lower mantle out from underneath. Just like if you were to sit on a water bed in excruciatingly slow motion, the earth’s surface depresses underneath the ice sheet, while surrounding areas (as far as tens of kilometers away) gain a little mantle underneath and bulge upwards slightly into a “forebulge”. This gradual movement of earth material can continue to react to shifts in mass for thousands to tens of thousands of years. In addition to this very slow movement, the rigid upper layers of the earth will also compress or expand “elastically,” like a regular mattress responds to your weight. The “water bed” and “mattress” responses work together to lower and raise the Earth’s surface as ice sheets grow or shrink. When you think about this at the scale of the Earth, it amounts to uplift of thousands of square miles of continent by more than an inch (30 mm) per year in some parts of Antarctica. This is because Thwaites Glacier, and the glaciers around it, are already losing meters of ice thickness per year — allowing the crust to spring back upwards a bit. But part of the signal is from past events, and the slow water-bed return flow of the mantle. That's why the GHC team is hitting the beaches, spoons in hand. 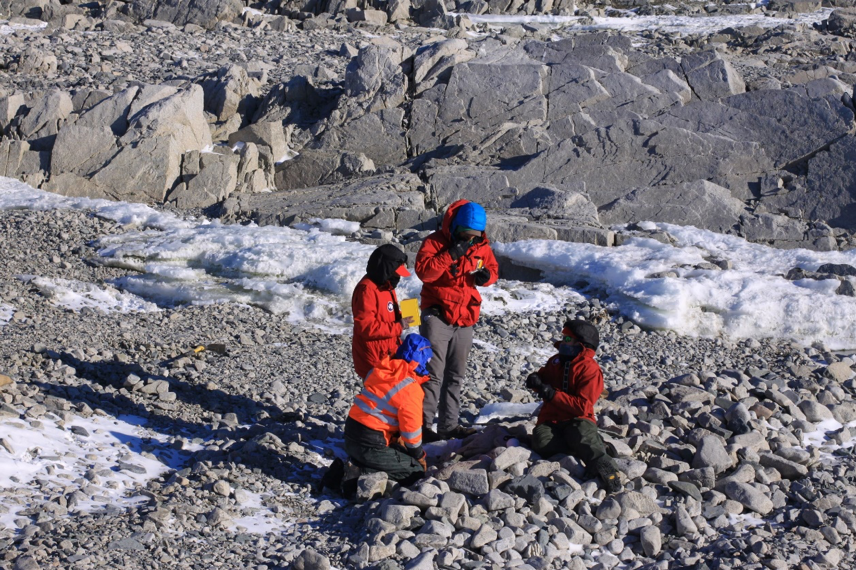 The water-bed-like isostasy effects happen all over the world. A famous example can be found in North America. Eighteen thousand years ago, the Laurentide ice sheet sat across Canada and the northern United States and created a forebulge in the Carolinas. Since the ice sheet’s disappearance, isostasy has caused the mantle in that area to thin, rebalancing back to the north. Isostasy causes North Carolina to sink by a pen tip width (1 to 1.5 mm) per year, making “relative” sea level rise there a little greater than global rates, and exacerbating coastal flooding. The opposite happens in Canada where the landscape is rebounding by as much as a finger width (up to 13 mm) per year. Our GHC scientists expect some rebound to be occurring in the Amundsen Sea and surrounding areas now since the West Antarctic ice sheet is much smaller than it was during the last ice age.

The beach team plans to use these predictable movements to find out if the ice sheet over Thwaites has grown or retreated in the last six thousand years. By using the preserved, carbon-rich penguin bones and seal fur to radiocarbon date ancient beaches that are now sitting far above the water line, they can plot the vertical position of the landscape over time. Ocean sediments and fossils, seafloor structures, and geological age-dating methods applied to sites in the outer reaches of the Amundsen Sea (the edge of the continental shelf) show ice retreated from there by six thousand years ago. We can infer that the ice sheet has been mostly stable since then. However, there is a possibility that the ice retreated slightly further in the first few thousand years of retreat and then re-advanced to its current location. Most of the evidence would be sitting directly under the ice sheet, hidden to us, but evidence may remain in these islands. Determining the uplift rates of the islands will help to corroborate if uplift occurred more quickly than previously expected, indicating more retreat than previously thought, or at the expected rate of uplift for current understanding. These will serve as important inputs for ice sheet models that predict future ice changes and sea level rise as climate and ocean temperatures change. Their findings may also tell us more about whether these ice sheets can still re-stabilize after the retreat they are experiencing, or not. Scott Braddock digs down into a relict beach to retrieve a preserved shell that will be radiocarbon dated once back to the University of Maine. Meghan Spoth (red) and Kelly Hogan (orange) look on and record the sample's location and description. Photo credit: Victoria Fitzgerald

Sitting in pairs on two separate beaches, the GHC scientists sat cross-legged or laid down prone on the rocky ancient beaches sifting through the top few inches of the beach sediments. By getting material to date from within the sediments of each beach, Scott and Meghan plan to determine approximate ages of each of the beach levels. The team also measured each beach’s elevation with GPS. Knowing that actual sea level remained nearly constant during the time period represented by the beach, they can then use the radiocarbon age and beach elevation to calculate how fast the islands rebounded up from the sea. Not bad for a day’s work with a spoon. 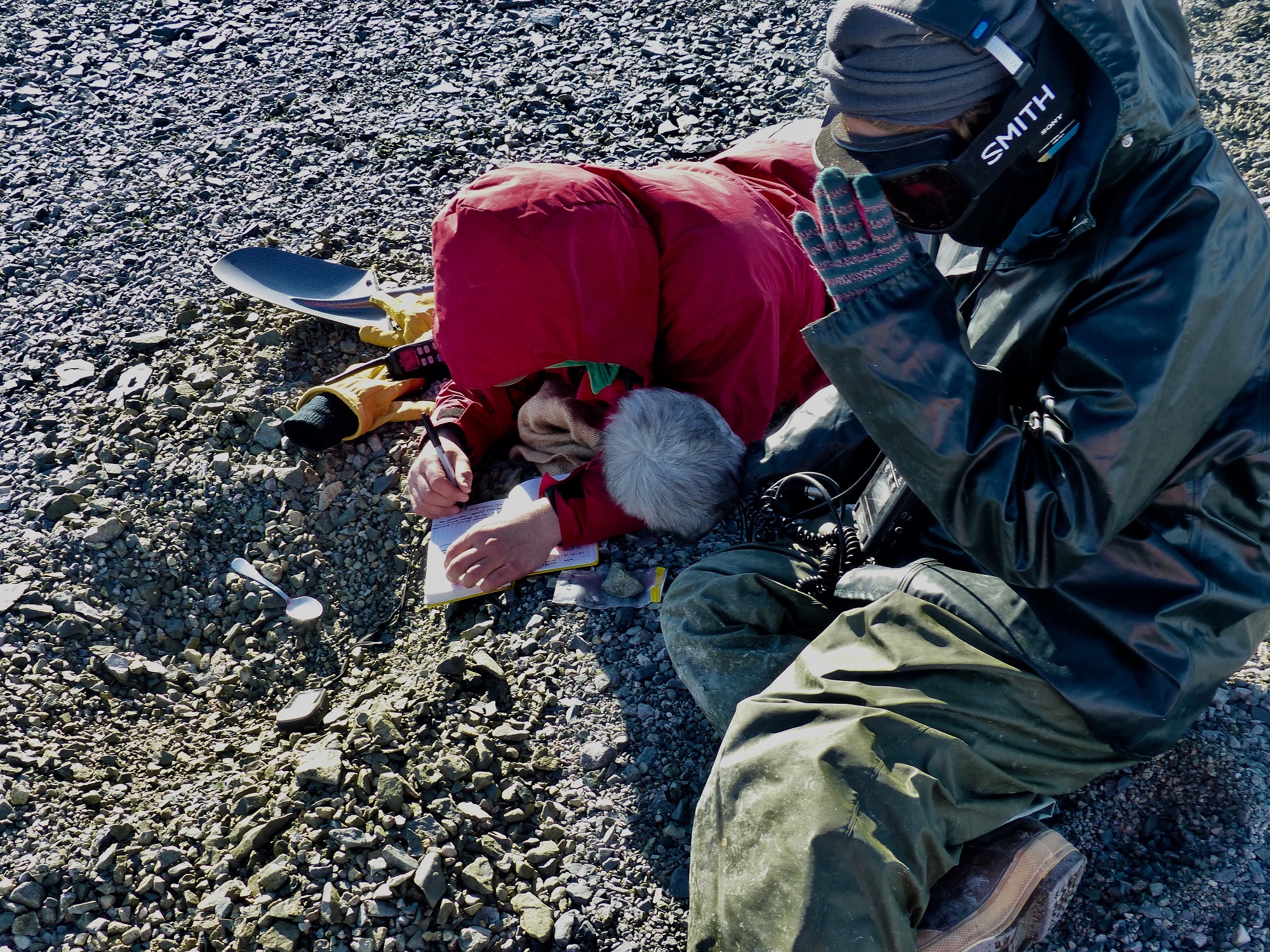 Victoria Fitzgerald records sample information about the shell fragment she just found while digging into a raised beach with a spoon. Carolyn Beeler, a radio reporter from BBC's The World (right), takes an audio recording of the find. Photo credit: Tasha Snow